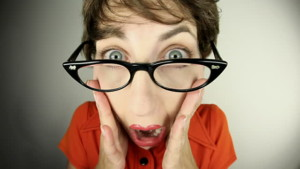 Almost every woman experiences a Defcon 5 moment when her partner touches, grazes, or, God forbid, holds a body part she doesn’t like.

It usually goes something like this: “Oh my god! He’s touching my belly fat. He can feel how fat I am!!! Lord help me! He’s. Touching. My. Fat!”

It can be an agonizing, catastrophic feeling—like he’s going to lose his erection, roll off you, and turn the TV on to take his mind off Nightmare on Bed Street.

Just for the record, you’re wrong. Men don’t touch body parts they don’t like. If he’s touching your thighs or your belly, it’s because he likes it. Male hands may be clumsy, but they are not dyslexic—they can see everything as it appears.

They know exactly where they’re going, what they’re touching, and what they’re holding. I know you may be freaking out that he’s touching your belly, but he’s not. Men touch women’s parts because it turns them on.

Are You Afraid Of Being Naked In Front Of Him?

Activate some double-duty rationality when he touches a forbidden zone. First, know we men move toward what we like and away from what we don’t. If we’re touching a body part, it’s because we want to, not because our hands wandered over by mistake. Know this, and take it for what it is—your body is a turn-on to him.

Of course, knowing that your partner didn’t “accidentally” touch some perceived flaw—that he did it because he thinks it’s lovely—can only reduce your panic so far. You can go further by putting the 25 percent factor into play. Consciously remind yourself that whatever he’s touching is 25 percent smaller, tighter, and prettier than you give it credit for.

Still, an ounce of prevention is worth a pound of panic. I want you to try a powerful technique that will significantly reduce the panic you feel when he touches an objectionable part of your body. It comes courtesy of my girlfriend Cynthia, who taught me a valuable lesson about touching, being touched and how to feel comfortable in your own body.

She’s a makeup artist who specializes in people who are facially disfigured by accidents and fires. As she talks about foundation and mascara with her clients, she does something completely unexpected—she puts down the eyeliner or whatever she’s holding and touches their faces in a soft, loving way.

Her clients often weep, for it’s the first time that anyone, let alone a stranger, touched their faces with such tenderness. “It’s shocking enough that I touch them in an area they consider repulsive,” says Cynthia, “But that I do it with love, without judgment or fear, is what makes it so emotional for them—and for me.”

I think you should take my girlfriend’s advice. Touch the parts of your body you don’t want guys to touch and send love through your hands. Try a five-minute experiment right now. Close your eyes and put both your hands on your belly. Let the judgments come—it’s not like you can stop them.

After a minute or two you’ll notice the judgment ease up a bit. Feel the heat from your hands and visualize an amber glow emanating from them and surrounding your belly. Say, “I forgive you for not being flat and I forgive myself for placing such unrealistic demands on you.”

Send love through your hands the way Cynthia does for her clients. It is a moving experience that will transform the way you react to being touched in bed.

Managing Your Mind by Managing the Energy

Any activity that brings attention to your body is going to redline your poor body image. Try walking past an attractive group of people in your bathing suit and see what happens. Sex, of course, is the mother of all anxiety-provoking activities. It requires you to disrobe in front of somebody who’s going to pay careful attention to your body.

Often this immobilizes you. The more you move the more he sees, and you don’t want that. So you discourage new positions, especially the ones that might highlight your perceived flaws. Pretty soon you’re still as a statue and that’s when you inadvertently create more of what you so spend so much energy avoiding—attention on your body.

By withdrawing from sex you have nothing to focus on but your perceived flaws, which just increases your sexual self-consciousness. That’s why the first step out of this trap is to be active in bed. Remember:

Be a vehicle for pleasure rather than an object to be looked at.

Being a vehicle rather than an object means you can drive your attention away from self-judgments to better lands—like your partner’s body, the sensations you create, and the ones you experience.

In the next post, we’ll how being good in bed can help improve your body image (or at least put it in the corner). In the meantime, here are some tips for your partner, too.