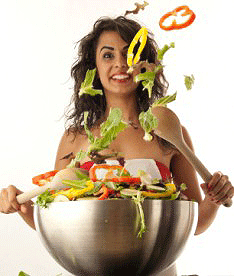 Given all the sausage we’ve binged on, it’s time for a little lighter fare. Let’s toss some salad! Now, I know some of you are thinking, “Whoa! I just lost my appetite!”

As long as he’s clean you’re not going to run into any poop chute stragglers or inhale odors that would spring the coil off a wall clock.

Your nervousness about the ick factor can be wiped away with a good shower.  His ambivalence about getting his anus stimulated might take a conversation or two.

First, I seriously doubt any woman has proposed it to him.  Second, he probably thinks it doing it will make him gayer than a box of kittens. But enjoying ass play only makes you gay if your partner is a man.  If it’s a woman it simply makes you adventurous.

As undignified as it may seem on the surface, licking your man’s butt hole flips the power dynamic to your favor, as the receiving partner turns submissive and the one doing the licking has all of the control.

The shared vulnerability in performing analingus increases trust and enhances intimacy. He is letting you do things he’s probably never let another woman do and you’re exploring parts unknown.

Both of you are vulnerable and that’s why a shared experience like this can build intimacy. To avoid long-term emotional trauma, take your time initiating analingus, and pay attention to what arouses your man and what alarms him.

But be bold, as the final frontier of oral sex requires us to stray away from a guy’s frontal region and explore the great beyond.

A human’s rectum is covered in millions of germs, most of which are benign or serve beneficial purposes (such as preventing leakage or odor), but some of which — including E-coli and salmonella — can lead to, um, food poisoning.

While it’s healthiest to perform analingus using some form of dam (such as Saran Wrap), thoroughly washing the anus usually makes it safe enough for oral play. Your man doesn’t have to scrub his butt with bleach or ammonia, but at the very least he should hit the showers and scrub the area with soap.

Full Steam Ahead Or Talk First?

There’s a certain genius in surprising your partner with an adventurous romp but there are certain precautions you might want to entertain with this one.  If you want to surprise him, make sure it’s a night you’re certain he’s taken a shower and hasn’t eaten a broccoli and bean salad.

He may be clean but you don’t want the breeze from his farts blowing hair in your eyes. If you want the element of surprise but are worried about his cleanliness, then take a bath together—it’ll give you more confidence.

Your other option is to talk and tell him what you want to do:  “Honey, I want to lick and kiss parts of you that I’m pretty sure no one’s kissed.”  That will either bring up an erection or an alarm.  Either way, the path forward is set.

Before we dive into the dark abyss of analingus, we’re going to spend some time frolicking in the entire pelvic zone (the “tain’t,” the back of his scrotum sack, and of course, his sphincter).  This “P-Zone” is rarely stimulated by men themselves, let alone by their partners.

It’s very likely that you could be the first human to chart your man’s pelvic zone and the unfamiliar sensations that rush through him will no doubt have his eyes rolling to the back of his head.

While you’re licking your man’s balls, take a detour to the right or left and begin licking the inner crevice of his thigh (behind and adjacent to his balls). It’s likely he will flinch and squirm from the pleasure as in some men it feels ticklish.

Brace yourself for his physical reaction and stay focused on taming him with your tongue. Reduce the tickling sensation by flattening your tongue to cover more area and going slowly so that your man’s insecurities are replaced with comforting pleasure.

You want him to enjoy this not flail in self-defense.

The inner pelvis is laced with connective penile tissue, directly linking it with your man’s sexual nerve centers. This also means that it is extremely delicate and so you should make sure you don’t apply too much pressure with your kissing.

The P-Zone offers a friendly region where you can practice and simulate your technique for eating your man’s anus. Your tongue remains the most vital tool in this process, and it should be constantly dabbing, swiping and circling the inner pelvis, either by itself or in conjunction with the lips.

The P-Zone is an often uncharted paradise of pleasure, brimming with nerve endings, blood vessels and tissue that connects it to the penis.

As we discussed earlier, the taint is loaded with nerve endings, and serves as an outer access point to a man’s prostate. Spread and slightly elevate your man’s legs to allow you to tongue his taint, mimicking the motions he makes when he’s eating you out — sucking with your lips, poking it with your tongue, and lavishing it with lascivious licks.

In the next post, we’ll really get going and combine all your new skills into one! In the meantime, get a few more tips to become an expert chef, at least with tossed salads.