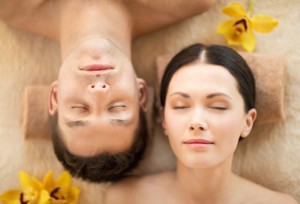 He will most likely perceive you finger-banging his bum as a violation of his masculinity.  What’s next he’ll ask?  Designing the Macy’s Christmas window? Figure skating? Cock flavored lollipops?

We’ll talk about the best way of convincing him later.  First, as the gays like to say when they’re in a tight spot,  “Let me back up.”

Let’s talk a little more about the prostate before we tackle whatever “gay panic” he might experience. The prostate is a walnut-sized gland located between the bladder and the penis (just in front of the rectum).  It produces fluid that nourishes and protects sperm.

During orgasm it squeezes this fluid into the urethra where it mixes with sperm and comes out as that whitish semen many of us think of as the nectar of the Gods.

Obviously, the prostate is crucial to a male’s experience of orgasm. Ask your partner about his experience with “ejaculatory inevitability”—the point when he’s about to come and he feels it deep inside before anything comes out.  The vas deferens, seminal vesicles, and the prostate generate that feeling.

If the prostate plays such a critical part of a man’s orgasm, it makes sense that stimulating it is going to dramatically heighten the pleasure of an orgasm. That’s not a gay fact; it’s a male fact.

Stimulating your prostate with a finger (yours or your partner’s) or an object doesn’t make you gay.  Not that there’s anything wrong with that (I should know!).

Being anally penetrated doesn’t mean you’re so far in the closet you found Christmas presents or ran into the lion in Narnia. It simply means you discovered a way to make your orgasms more pleasurable.

To show you how “not gay” prostate stimulation is, consider the poor schmucks who have prostatitis, an inflammation of the prostate.  The most effective treatment is to “milk” the prostate by stimulating it with a finger.  Doctors, mostly male, do it 2 or 3 times week for their male patients.

So, if it isn’t “gay” for a male doctor to insert his finger into another man’s bum and stimulate his prostate then why is it gay to have a girlfriend or wife do it?

Besides, I can almost guarantee your partner has had another man inside his ass and he didn’t consider it gay.  Guarantee it.  Has he ever had a physical?  Then he’s had a man’s hands up his ass.  It’s the only way to conduct a prostate exam.

A recent survey showed that 80% of women would perform a prostate massage if asked by their partner, so clearly the objection is not coming from women.  It’s coming from men who fear being perceived as a ‘mo if they wander down that path.

Wait, what?  You heard me. Lea DeLaria, my favorite lesbian comic explains it best.  She once said, “I don’t know why people say lesbians don’t like dick.  We love dick!  We just don’t like them on men.”

The biggest obstacle to massaging the prostate is getting past the two sphincters that guard the goods inside.

Everybody Has Two Sphincters.

The two sphincters are distinct but overlapping bands of muscle tissue. And while they serve the exact same function (regulating grand openings and final close-outs) they go about it in different ways.  You are most familiar with the external sphincter because you can order it to tighten and release.

Now do five fast tightens.  Get it?  You can boss that part of your butt around.  Feel like taking a crap but there’s no bathroom around?  No problem.  You can will your external sphincter not to open.  At least for a while.

But the internal sphincter?  You can’t tell it to do shit.  And I mean that in every sense of the word.  You are not its boss.  Like your blood pressure and heartbeat, you cannot directly control it.

Do this:  Put your hands in front of you as if you’re praying.  Now intertwine your fingers down to the webbing and press your palms together as tight as you can.  Now keep everything connected and completely relax both hands.

Notice the small opening between the side of your thumb and your index finger?  This is the opening to your anus.  If somebody tried to poke their finger through that opening it would feel snug but it’d go in pretty easy.

The internal and external sphincter can and often do work independently of each other. In order to make penetration smooth and effortless both sphincters have to get on the same page.

In the next post, we’ll wrap it all up into a nice, hard package. In the meantime, if you’re more the hands-on type, check out these…ahem, instructional videos.