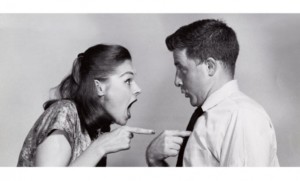 Once, in the middle of making love a girlfriend heard her boyfriend say, “You know what would make this even hotter? If you sucked in your stomach.”

My girlfriend was devastated.

How do you respond to that kind of cruelty? With counter-insults? By ignoring it? By talking it out right then and there or waiting for a better time? And what should you say?

Tactless comments, backhanded compliments, subliminal cheap shots, stealth insults, or intentional slams all have the power to wound you emotionally and make you more self-conscious during sex, especially from guys you’re interested in or are in a relationship with.

The insults can be overt (“You’d look a lot prettier if you lost ten pounds.”) or covert (“Do you think it’s a good idea for you to order dessert?”).

It can be private (buying you a push-up bra as a gift) or silent (spending forty-five minutes in the bathroom getting ready only to be greeted with silence when you come out). The list goes on. Before we talk about the best ways to respond to insults, it’s worth pointing out something you might not be all that conscious of…

The Media and Body Image

Your self-worth is always being pegged to your attractiveness. Once you realize just how many subtle slights and chronic cheap shots you endure during the course of the day, it’s easy to see why a careless comment, let alone an abusive insult, from someone you like can feel so devastating.

It’s precisely because you’re in such an emotionally vulnerable place about your looks that you have to consider the first rule of handling an off-putting remark. And that’s to ask yourself…

Is It Really an Insult?

When you are unusually self-conscious, every comment about your appearance can feel like a personal attack. Even when somebody pays you a sincere compliment, you’re likely to seize on some aspect of it and make it fit whatever you already feel about yourself.

If somebody says, “You look good today,” you will seize on the word today. Because “today” clearly means you looked like the hindquarters of bad luck yesterday.

When you have a story running through your head, you tend to make everything fit the story. This is especially true for comments that are open to interpretation. There is often a great expanse of territory between what was said and what you heard.

Faced with a questionable comment, you should always pause and ask yourself, “Given that I’m sensitive about my appearance, is this comment something that a body-confident woman would consider an insult?” Because if the answer is no, then you should let it roll off you like water-repellent fabric.

If It Has Testicles or Tires, You’ll Have Trouble

Some comments, like the one from my girlfriend’s unbelievably cruel boyfriend, are just flat-out insults—offensive to the core and cutting to the bone. You can tell when something is a legitimate insult by the way grief, hurt, and rage roil in a boiling emotional caldron.

In addition to the normal reaction that most people have to a cutting comment, body-conscious women often have to fight against something bigger than the hurt: believing in the insult. It can feel like a confirmation of all that you believe is awful in you. Like you just got exposed for trying to hide the ugly truth.

That’s why even a careless, unintended comment sends so many women into a deep depression. Underneath the initial anger, they agree with the insult. They accept it as a terrible validation of their worst fears. The first step to formulating an appropriate response is to…

An insult is bad enough—stuffing your feelings and building up pressure just creates more problems. Do not pretend there’s nothing wrong. Your feelings are a key part of your internal guidance system. Pain is a signal that something’s wrong. Accept the signals so you can deal with them effectively.

Instead of burying your feelings, notice them. If they could talk, what would they say? Once you sort out your feelings, you’re in a better position to recover. When feelings own you, they can wreak havoc. When you own the feelings, you can be an agent for positive change.

In the next post, we’ll give your partner tips that will help both of you.  In the meantime, ways to be direct when someone hurts your feelings, in and out of the bedroom.