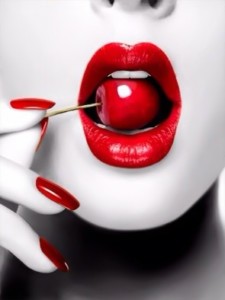 Have you ever seen a speaker tap a microphone that’s obviously working and ask, “Is this thing on?” You need to do the same thing to your partner’s dick—tap it and ask,  “Am I turned on?”  Because if you’re not, you’re never going to enjoy blowing him.

Our readers enjoyed: How To Give A Good Blow Job

Once you understand why you like penis, it’s time to express that desire with your lips, tongue, throat and hands.  But not just for him; for you.  As I’ve said before, to truly give great head you have to see it as critical to your own sexual satisfaction.You have to see blowjobs as a principal way for you to pleasureBut attraction to power dynamics aren’t the only reason to want his hardness in your mouth.  It’s also about the pleasure you get from seeing him in so much ecstasy that renders him incapable of thought.  And because his erection is a symbol of his attraction for you, it makes sense that you would want to pleasure it.  It’s hard but silky sensation has a good “mouth feel” and having it there creates a tender after-it’s-done intimacy.

1.Your Mouth Has To Be Wetter Than A Cucumber At A Women’s Prison

The wetter your mouth the better it’ll feel to him and the easier it will be on your mouth, lips, tongue and throat.  You’ll slip, slide and glide easier and get more pleasure out of what you’re doing.  The fastest, most convenient way to produce more saliva while you’re giving him head is to visualize biting into a lemon or to “gleek” – placing the tip of your tongue on the roof of your mouth for a few moments (it pools the saliva under your tongue).

Apply the law of reciprocity—how would you want him to go down on you?  You’d want a slow build.  Think of an iron warming up, not a rocket taking off.

Everything should start gently and slowly (the grip, the pressure, the speed) and build toward a climax, with an emphasis on the journey, not the destination.  Think of a giant roller coaster.  You don’t just get on it and jerk away at 60 MPH.  It chugs slowly and inexorably toward the top and then…all hell breaks loose.

4. Use Your Hands As An Extension Of Your Mouth

After a few minutes of mouth-only action, you will drive him crazy if you add your hands to the mix.  Mouths can’t create the pressure or friction most guys need to maximize their pleasure (especially to ejaculate).

5. Use Your Tongue To French Kiss The Head Of His Penis

This is one of those “If you don’t remember anything else” tips about giving great blow jobs because the sensation is so extraordinary.

Sweet smacking sounds, squelchy, sloppy slurping and slovenly sucking are music to a man’s ear.  He’ll put it on Spotify and mark it as his favorite playlist. Sex sounds are primal passion boosters; their power cannot be overstated.

7. Keep Him On Edge With The Peacock Technique

Use a  “suspense and resolve” approach to build anticipation and create memorable experiences.  Remember, it’s not what you do to him. It’s where you take him. And you can take him to the edge of space with a Tease-Lure-Escalate-Resolve model.

8. Keep The Same Rhythm When He’s Close To Climaxing

There’s such a thing as momentum during sex and you don’t want to change anything when you sense it.  If he starts approaching “ejaculatory inevitability” keep the same grip, pressure, speed, rhythm and moisture until he finishes completely.

Do not change anything (unless he asks you to—and it’s usually “Faster! Harder!”) It’s fine if you don’t want to swallow or even get semen in your mouth—pull your mouth off his cock but keep going with your hands.

It’s also important for you to keep going until he has completely stopped coming.  Better to have him pull you off than to leave him too early in his hour of need.

9. The Most Important Technique Of All!

It’s YOU, silly.  My point, and I really do have one, is that it’s easy to lose yourself in an activity that requires you to pay attention to other people.

And the most important question?  It’s for your partner:  What can HE do to give you more pleasure?

If you think “twirl and swirl” is a new cone at Dairy Queen, think again.