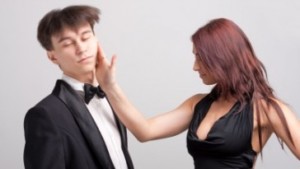 Have you ever teased your partner about her appearance? Or made veiled comments about her weight? Or visibly noticed other women in front of her?

That’s proof that God gave you a brain and a penis but only enough blood to run one at a time.

You may have been contributing to the unease with her body by making some breathtakingly insensitive comments. Any comparisons to other women or comments that hint at dissatisfaction with her body will make your chances in the bedroom fall faster than a six-pack through a beer bong.

Your job is to make sure that never happens. Here’s how:

Don’t make jokes about your partner’s appearance. This is a hard one for men because teasing has a central place in the way we communicate. It’s the driving force of our personalities and the way we show camaraderie. You can’t do that with women. Not about their appearance, anyway.

Once, a girlfriend came out wearing some new clothes she had just bought. She asked her husband the mother of all relationship-busting questions: “Do these jeans make me look fat?”

Her husband taught me something valuable that day—that there’s a worse answer than yes. It’s “Let me back up so I can take the whole thing in before I answer.” He slept on the couch so long the fabric still has the imprint of his face.

Don’t look at magazines featuring gorgeous women and then hit on your partner. My friend Jeff did it once. Here’s how his wife reacted: “There is no way you’re laying your hands on me after you’ve looked at all those big-breasted, small-butted women. You’re not going to use my body to fulfill your magazine fantasies!”

The only action he got that night was the on/off switch on the cable box.

Don’t ask her to do things that invite self-consciousness in bed. This is not the time to switch the stadium lights on and ask her to strip. The same goes for asking her to model panties, swimwear, or doing a modified pole dance. It will ignite her appearance anxiety like a propane torch.

This is disappointing, of course, because watching a woman disrobe is a huge turn-on for men, but think of it as a postponement rather than a cancellation. Eventually, she will have the confidence to do all these things, just not right now. First, it’s about getting comfortable in the bedroom.

Be specific in your compliments. Saying “I like your legs” is good. Saying “I love the way your legs look in that dress” is better. Saying “It’s hard to concentrate at work because I can’t stop thinking about how your legs looked in that black skirt” is best.

Show her how you feel about her body. If there’s something you like about her body, don’t just tell her, show her. If her legs drive you crazy, tell her while you massage them.

A touch is more powerful than a verb. A stroke is stronger than an adjective. Compliments have limited effects on body-conscious women because they rarely penetrate the wall of negative judgments.

Touch operates on a deeper level because the body can override entrenched thoughts. A pleasurable sensation has more power than a negative thought.

In the next post, we’ll bring it all home in the final post of this series.  In the meantime, check out the interesting reasons men and women tease each other.