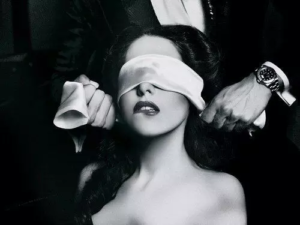 You set these limits for your own protection.

You will save yourself a lot of grief by setting limits at a lower threshold, having a good experience, and later raising them than setting them high, having a bad experience and then lowering them.

If your partner is the submissive and wants a bit of light pain, is it purely the physical sensation of being hit that he’s looking for or is it to feel like he’s being punished for some made-up transgression like violating the headmistress’ curfew?

Does he want a couple of thwacks on the arm or does he want to be smacked like a housefly?

Negotiating this level of detail beforehand may feel a little awkward, but it’ll save you some enormously unpleasant consequences.

Click here for a comprehensive look at dom and sub scenes.

“Consensual non-consensuality” is an important principle in domination and submission sex.  You must voluntarily give up your right to say no AND have the ability to immediately stop the action whenever you want.

You do that by granting consent before the action begins and agreeing on a “safe word” that immediately stops the action, breaks the illusion and returns you to reality.

What consent are you granting?  Spell it out carefully.  And what  “safe word” immediately suspends the action?  Communicate it clearly.

A safe word is a mutually understood word that when uttered, means STOP WHAT YOU’RE DOING RIGHT NOW.  It’s like a movie director saying, “Cut!”  Everybody instantly drops their role-playing.

Don’t pick the word “No” or “Stop” because part of the thrill may be to struggle against whatever is happening to you.  Sort of like when guys are handed a broom and cleaning supplies so they can help with the housework.  They’ll shriek “No! No! No!”  but, really, it just means they want more.

Safe words break the action without breaking the mood.  They also allow the dom and sub action to continue once the requisite strap is adjusted or the muscle cramp massaged away.

Pick a safe word that’s totally out of context–“apple” or “book” or if you really want to be stopped in your tracks—“Al Gore.”

Safe words can be a simple on/off switch or a more multi-tiered set of signals such as “Red” (“Please stop right this instant”), “Yellow” (“proceed with caution.”) and “Green” (“Full steam ahead!”)

New activities should be accompanied by a pre-show role reversal.  If your partner wants you to punish him with a Ping-Pong paddle, have him give you a couple of whacks to see exactly how he wants you to do it.  It’s easier to adjust the intensity if you know what it feels like.

Plan For The Afterglow.

Some activities can be a bit more intense than anticipated, leaving you, your partner or both feeling a little out of sorts.  Don’t roll over and go to sleep right away.  Plan to bring the mood down slowly and gently.  Have a talk, a cuddle, a snack.  Special takeoffs deserve special landings.

Sometimes people are afraid that if they experiment with structured power playing they’ll walk through a door that will lock behind them.  They’re afraid they won’t want to go back to “normal” sex, that they’ll always hunger for something more.

Relax.  Dressing up as Cruella De Ville doesn’t make you hungry for dog.

Think of structured power playing as a journey to variety, a way of expanding your sexual palette.  Discovering something you like in bed doesn’t turn you into something less than or different from, it turns you into something more–everything you are plus this new thing.

In the human mosaic everything is a thread that contributes to the creation and growth of who you are.  Adding or subtracting a single thread doesn’t change the pattern.

In the last post in this series, we’ll bring it all together for you. In the meantime, people really are shouting “pineapple!” all over the country, it seems.