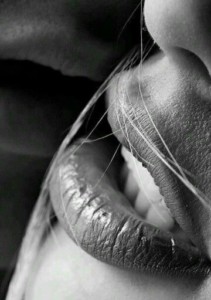 The most powerful sexual organ isn’t between your legs or between your teeth; it’s between your ears.  As important as skills are to the end result, they will fall flat unless they’re guided by a vision of sex that’s beyond the physical.  Let me clarify this with a guiding principle about memorable sex:

It’s not what you do to him. It’s where you take him.

All the skills, tactics, and techniques you’ve read so far about how to give the best blow job will make you a competent lover, but if you want to be a peacock among common poultry you need to have more than skills.

You need the ability to transport him into a different plane of existence.

And in order to do that, you have to understand how to create an agonizing joy called anticipation.

Anticipation is the feeling of excitement about something that is going to happen. The best blow job tips take you so far, now let’s go the rest of the way.

I’m going to show you how to capitalize on this feeling to deliver (and receive) maximum pleasure but first let’s talk about how anticipation works. I give you two scenarios:

Scenario 1: You walk into a friend’s home and she immediately waves a plate of delicious home-made chocolate chip cookies under your nose.  “Eat, EAT!” she says.  So you do.

Scenario 2:  You walk into your friend’s home and she waves a plate of homemade chocolate chips cookies under your nose.  “Smell,” she says.  You reach for one and she says, “Not so fast!  We have to wait for the other guests to arrive.”  She puts the plate right in the middle of the table so you’re constantly looking at its chocolaty goodness, salivating and fantasizing how good they’ll taste.  Finally, the guests come and she offers you one.

The answer is simple: Anticipation amplifies pleasure.  It creates so much excitement, activates so many nerve endings that things taste better with it than without it.

The object is to keep your partner’s body in suspense by only delivering an aspect of what he’s expecting (the way your host did by letting you see and smell but not touch or eat the cookies). This builds desire and curiosity, keeps your guy eagerly anticipating your next move and makes him crave you more.

By the time you’re done, the sexual encounter becomes more intense and satisfying (just like the cookies).

Robin Skynner, the great psychiatrist, once famously said, “Anticipation is the central ingredient in sexual desire.”  His studies proved that “Sex has a major cognitive component — the most important element for desire is positive anticipation.”

If you like this article, you’ll love our guide: How To Give The Best Blow Job

Anticipation is an emotion that mixes enthusiasm, pleasure, excitement and anxiety toward a longed-for event.  Like having your girlfriend’s mouth on your cock.

Wait, did I say “anxiety” in that earlier sentence?  Why would anxiety figure into sexual anticipation?  Because there is always some concern that the highly anticipated event will not occur.

Let me explain with a concept called “Suspense and Resolution.”

We experience suspense/resolve cycles all the time; we just haven’t necessarily labeled it as such.  For example, the high-schooler dying to find out if she got accepted to her preferred university.

She rips it open and reads the answer.  RESOLUTION.

It’s nearly midnight and the host is tearing up the envelope for best movie of the year.  TENSION.  She announces the winner.  RELEASE.

It’s match point at Wimbledon.  The champion you’re rooting for just missed her first serve.  She tosses the ball up in the air to hit the second serve. ANXIETY. It clears the net and lands inside the service box.  RELIEF.

For our purposes, there are two pillars to a suspense/resolve cycle.  First, is a longed-for event.  Second, a lack of knowledge about whether the event will occur.

Let’s apply this to a couple having sex for the first time.  She’s kissing his body from chest to stomach.  She’s headed south. For him, there’s a longed-for event (her mouth on his cock).

There’s uncertainty about whether it’s going to happen (he doesn’t know if she likes to go down). SUSPENSE.

She kisses the inside of his thigh.  TENSION.  She kisses his balls.  EXCITEMENT.

Finally, she puts her wet mouth on his raging hard-on.  AHHHHHHHHH.

Notice what happened here. Tension amplified the gratification.  The anticipation of satisfaction allows the man to get greater pleasure in the final gratification.

Imagine if the girl in the above scenario immediately blew him before he could even get his pants off his ankles.  Yes, it would still feel good, but would it feel as good if she had held back in the way a maestro holds a note on the piano–and then resolves it with a satisfying chord?  I think not.

As I see it, there are three types of “Oh My God!” a man can say when he’s in bed with a woman:

In the next post, we’ll really get down to the nuts of the process. No, really, his nuts. In the meantime, why scheduling sex ups the ante on anticipation.