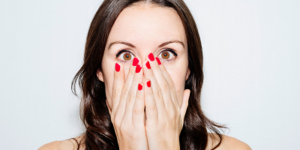 It’s time to tackle the elephant in the room (or is it a rhino?):  SIZE. Men are far more obsessed with the size of their penis than women are.

In surveys women don’t even rank it in the top three characteristics they look for in a man.  So if it generally doesn’t matter to women, why does it matter so much to men?

We’re going to spend a little time on the question of size because it is an extraordinarily sensitive subject for guys that can easily interfere with his performance and your satisfaction.

What Men Think When They Stand Naked In Front Of The Mirror.

Even when they see other live penises in captivity (locker rooms) they suffer from an optical illusion that makes them feel smaller than everybody else.  See, a penis on another guy looks bigger than yours because you’re looking almost straight at his but straight down at yours.

When you look down at something it always looks shorter than if you look straight at it.

Rounding out the follies, many men still believe that most women orgasm through penetration.  So the more equipment you have to penetrate her with the more sexually satisfied she’ll be, right?

Wrong. Seventy percent of women orgasm through stimulation of the clitoris, which is best done by a talented hand or a lubricated tongue.  Preferably both.

Lastly, men have to survive locker room insult culture. Once, I was changing in the gym and I overheard this conversation between two friends:  “Hey, would you wear shoes if you had no feet?  No?  Then why are you wearing underwear?”  That’s the kind of insult that can cast doubt even among the well-endowed.

Can You Tell If He’s Hung By Looking At His Hands?

A lot of people think they can tell how big a guy is by looking at physical features like height, foot or hand size, or even voice depth. In reality, there is little correlation between these factors and penis size, so you can stop searching for clues and enjoy your soup!

Even seeing a penis in a flaccid state will give you little indication of how big it will be once erect, as some guys are “growers not showers.”

So!  Straight from the Department of Duh:  The best way to tell if a man is hung isn’t by looking at his hands, feet or nose.

It’s by looking at his erection.

My Kingdom For Eight Inches

What’s fascinating about men’s obsession with size is that they focus on length.  But even when some women report that bigness is important (oh, you size queens!) they’re talking about girth or as my girlfriend says, “Roundth.”

At any rate, penile size can be measured in a lot of ways.  Obviously, the differences will impact the results.  There are two widely recognized ways of measuring the penis.

The most common is the “You Wish” method.  It involves looking at your pinky and seeing a thigh.

A Hilarious—And Accurate—Way To Tell If He Needs An Extra Large Condom.

Here’s a clever trick a condom company came up with to determine if your man is well-endowed:  Put a tube of toilet paper over his erect penis.  If it slides all the way down to the base, he’s average or below average.

If it gets stuck, then pop the champagne corks because he’s one of the lucky few.  Yes, FEW.  Condom manufacturers estimate that only 6% of the population needs extra-large rubbers.

First, the bad news:  the average penis size is not six inches.  The “six inch myth” got started when Kinsey did his landmark penis size study back in the 50’s.  Although there were 2,000 men in his study, it had a fatal flaw—the results were self-reported.

Men were asked to go into a room, get themselves hard and measure themselves.

Now tell me, would you believe anything coming out of a man’s mouth while he’s holding his dick?

Men always lie about size.  Why do you think we came up with maps that associate an inch with a mile?  Realizing that too many men were backdating their stock options, urologists developed a new way of measuring the size of the prize:  A third party.

So, now every legitimate penis study includes medical staff doing the measuring and reporting.  And guess what happened? The average erect penis size shrank from Kinsey’ 6.2 inches to 5.1 inches!

Now the truth is that different penis size studies show different results but NONE of the studies come anywhere close to the Kinsey study that popularized the six inch myth.  Let’s take a look at the latest reliable study as of 2016.

According to this study, the average erect penis size is less than six inches.  And, read it and weep, African-American men don’t have bigger penises than white men.

Combine that with data from the Centers Of Disease Control (CDC) and I have some very bad news for the enduring African-American stereotype:  Black men aren’t bigger than white men in any department–not height, not weight, not BMI, and sadly, not penis size.

Take a look at some of the eye-opening penis size stats from the Journal Of Sex Medicine and height/weight figures from the CDC:

Please note: The difference in length and circumference between the races is statistically insignificant. This study is relatively consistent with the results of prior surveys.