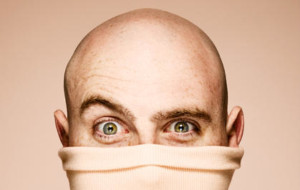 You’ll probably have more than one penis in your mouth over the course of your sexual career and you’ll soon realize that there is a great diversity of dicks.Some are

Some are skinny and straight, while others are fleshy or have more curves than a scenic railway. Still others (LOTS of others) will have their foreskins attached.

Most American men are “cut,” meaning that they’ve had their foreskin—the tissue covering the head of the penis– surgically removed. Circumcisions are usually made on the first or second day after birth. The custom for Jews is the eighth day.

There are many ways to perform the surgery, but it basically works like this: The foreskin is “freed” from the head of the baby’s penis by first grasping it with forceps, widening the opening, and then making a slit with a surgical knife.  The slit is then separated and the foreskin is laid back.

How To Give Great Head

Oy vey!  Let’s move on to happier subjects –like the benefits of having an uncircumcised penis. That’s a much tastier subject.

As a culture, we believe that cut penises are more hygienic, even though there is no real supporting data. Some reports show circumcision lowers risks for infant urinary tract infections, penile cancer and possibly-maybe-but-nobody’s-sure, sexually transmitted diseases.  But come on, infant urinary tract infections aren’t very common and penile cancer is extremely rare.

In fact, the American Academy of Pediatrics was so unimpressed with the clipping crowd that in 1975 it recommended circumcision no longer be performed as a routine procedure because it wasn’t medically necessary.

If you liked this article, you’ll love our guide, How To Give Great Head

I’d love to blame the medical industry for cutting our foreskin and pulling it over our eyes but the truth is we’re also to blame.   We’ve turned circumcision into a fashion statement and disguised it as a medical need so we can feel good about it.

Most experts agree that the uncircumcised penis is more sexually sensitive.   It makes sense if you think about it–the heads of most American dicks are constantly rubbing up against underwear (or if you go commando, denim), while our compatriots around the world get to wear protective sausage sacks.

Well, no wonder uncut guys like Latinos are so passionate!  They’re feeling so much more than we are! Too bad we can’t paste our foreskins back on.  I’d do it faster than you could say “prepuce.”

By the way all of the tips and strategies in this book apply to circumcised men (about 80% of American men) but since most of the world’s men are NOT circumcised, there are special considerations and techniques for how to give the best blow job to an uncircumcised partner. I’ll go over those in detail later in another post.

Overall, it’s important to remember that because it spends most of its time sheltered by foreskin, an uncut penis is generally more sensitive than a circumcised one.

It’s best to err on the side of tenderness when you’re first starting out, and pay attention to what makes your man moan and what makes him wince.

Why Is His Penis Darker Than The Rest Of His Body?

Again, foreskin protects the head of the penis from rubbing, scratching, and scraping against clothing and that makes them more sensitive to the touch of your tongue or your hands.  On top of that, anatomical studies show the foreskin has a rich concentration of complex nerve endings, adding to its sensitivity.

Uncircumcised men have to be more conscientious about cleaning their penis than their circumcised counterparts.  That’s because smegma, a cheesy secretion, can form under the foreskin unless it’s cleaned daily.

The extra skin that covers an uncut penis can be one of the most confusing parts of sexual anatomy. The very sight of it can send chills through inexperienced women, as they’ve likely had zero warning that it looks different from circumcised penises.

In case you haven’t seen one, the flaccid uncircumcised penis looks like the head is wearing a turtleneck.  During an erection, the head “pops out” of the turtleneck.

Few penises are as straight as uncooked pasta. Most have some degree of bend and a few have more curves than a racetrack. A curved penis can be a wonderful blessing during intercourse, as it’s able to reach and stimulate parts of the inner vagina that go unexplored by a straight-on boner.

But it can be intimidating during oral sex, given the logistics of your narrow throat. While most penises have some degree of curve to them, some have what would be considered irregular angles and some even have a “crooked” appearance, where the top part of the penis skews in a different direction from the base.

Intense curvature of the penis is often attributed to “vascular trauma” that can be caused by rough sex, athletic activity or a physical accident.

The most basic and important factor in sucking a curved dick is positioning, and it may require you to explore the world beyond your knees. A guy with a dramatic upward curve might be easier to give the best blow job in the 69 position, while a penis that curves to the left or right might be more suckable with you on your side.

Be open to trying a variety of positions that maximize your comfort and you may find one that lets the dick slide down your throat easier than lubed oysters.

In the next post, we’ll look at the size of his prize and why it might not matter that much to you.  In the meantime, check out the 9 penis shapes you’ll likely meet in real life.