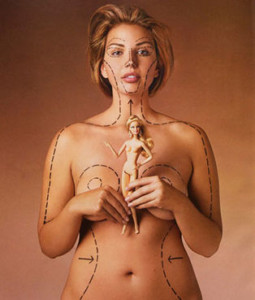 What do men want in a woman? What do they want women to look like? It’s important to know because you’ll have a much better chance of attracting male attention if you know what makes men say “hubba hubba.” Understanding this is also the first step toward getting comfortable in the bedroom.

This is simple evolutionary mate selection at work, and it applies to males as well. They have little chance of attracting females if they don’t know what females are attracted to.

You’d think that women would be experts at knowing how men want them to look, but the research proves otherwise. Women so consistently overestimate male preferences for slenderness that it leaves some researchers wondering what world women are living in. And that not knowing is ultimately leading to women being self-conscious in bed.

Let’s take a quick look at how academics discovered the discrepancy between what men like and what women think men like. In the typical study, men and women are presented with representations of the female form—from very thin to very fat (these figures are mostly line drawings, but some studies use silhouettes, illustrations, or photographs).

They are then asked to circle shapes that represent:

The results? Women overestimate male preferences for slenderness. Constantly. Consistently. In nearly every study. This phenomenon baffles researchers because it’s completely at odds with the prevailing theory of how men and women pair up.

Mate selection theory holds that women intuitively know what men prefer; otherwise, they wouldn’t know how to attract them. This ability also allows them to assess their “relative value” against women they’re competing against.

This is an evolutionary characteristic that facilitates procreation in all species. Knowing male preferences allows females to feature the characteristics that will attract them.

Why are women losing their ability to gauge male preferences? Researchers theorize it’s a direct result of the media’s relentless presentation of women who can fit between a door and its frame. As the authors of a 1995 study in Sex Roles noted:

“The media images emphasizing thinness cause a woman to downscale her own ideal size from her real size rating but may be powerful enough to cause her to distort her perception of her partner’s ideal female.”

The authors of a Journal of American Psychology study on sex differences in perceptions of desirable body shape were particularly blunt in their assessment: “Our data suggest that women are misinformed and exaggerate the magnitude of thinness that men desire,” write the authors, “probably as a result of promotion of thinness in women through advertising by the diet industry.”

Women are just as bad at estimating what kind of bustlines men prefer. Breast size preference studies (yes, they exist—don’t ask me how they got their funding) show that females believe men like larger breasts than men actually report.

Okay, so now we know what women think men like, and it’s wrong. What’s right? What body types do men prefer? The only way to find out is to ask them, and that’s what a great many researchers have done. Before I share the results, let’s talk about how these studies were conducted.

The earliest cosmetic surgery in England consisted of removing two lower ribs to enhance the narrowness of the waist. It also explains the popularity of corsets, despite the internal injuries it caused so many women. The corset was replaced by girdles, then by wide belts, and today, Spanx.

The second measure of attractiveness researchers use is the body mass index (BMI), which, again, you calculate by dividing your weight (in kilograms) by the square of your height. Interestingly, BMI is a far greater predictor of attractiveness than WHR. But whether it’s measured by WHR or BMI, studies consistently find that men are attracted to women who fall between the low to middle range of the normal scale.

Men are most attracted to normal-weight women.

Yes, they prefer “slender” body types, but within healthy, normal weight. They don’t like throwing bread to a woman and having it come back sliced. They are not attracted to the ideal of beauty presented by most media. They are attracted to healthy-looking women.

I want you to understand why men will never be attracted to the level of thinness you’re so invested in. From an evolutionary standpoint, men are drawn to women who show strong signs of fertility.

Because there are no physical signs of a woman’s capacity to bear and nurse children, men use an indirect marker—beauty. But for beauty to be a reliable marker of fertility, it must have characteristics linked to health.

In the next post, we’ll talk about the one thing you can’t argue with. In the meantime, check out what men really want (and most of it’s outside the bedroom).