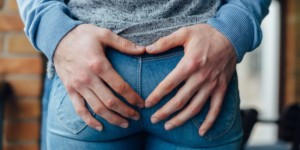 You can’t shut off long-held beliefs as if they were light switches, but you can make a lot of progress by questioning the assumptions you’ve internalized. Let’s start by asking a question.

How “Anticipatory Pain” Can Make Your Butt Tighter Than Two Coats Of Paint.

“Anticipatory pain” is a psychological term for the expectation of pain. It speaks to the emotional and physical consequences of this expectation. For example, if you are convinced that something will be painful, your body will tense up in the expectation of it. The more you believe that anal sex (or as I call it, “backdooring”) will hurt, the tenser your body will get.   Your butt will clench for its safety as hard as it can. This expectation of pain contributes greatly to your inability to relax. If you’re convinced that backdooring is going to hurt like hell, how in God’s pajamas are you going to be relaxed enough to enjoy it? Imagine telling someone, “This is going to hurt worse than a motor-powered root canal, so just relax.” Right. That’s helpful. But that’s what you’re saying to yourself and as long as you keep saying it you’re destined for failure.

Let’s just hope the surgeon doesn’t get an attack of jazz hands during the procedure.